skip to main | skip to sidebar

A Bullet for a General - Review

Damiano Damiani's 1966 film 'A Bullet for the General' is one of the first examples of the Zapata Western, a subgenre of the Spaghetti Western that mostly dealt with political themes during the Mexican Revolution of the early 20th century. Gian Maria Volontè plays El Chucho, the leader of a Mexican bandit gang who earn their pay selling arms to revolutionaries - he meets with a suave gringo named Bill Tate (played by Lou Castel) who claims to be on the run from the law and soon finds himself inducted into the group and deep in the heart of the Mexican revolution. 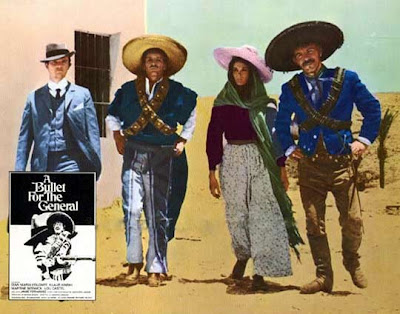 Despite the simple sounding premise 'A Bullet for the General' displays a great depth of character as the protagonists relationships shift with the plot before innevitably exchanging roles. The first hour or so seems like a standard western affair with lots of the usual train hi-jacks and bandit raids, but as the characters develop and their realtionships become more strained we see some marvelous performances from the suspcious El Chucho, his brother El Santo (a fantical Christian revolutionary played by Klaus Kinski) and the cool and unflustered Bill 'Niño' Tate.

The doubt displayed by El Chucho towards Tate really sets up the finale, and as the film nears the heart of the revolution Tate's motives become clear - but that doesn't stop Damiani pulling a nice twist at the end, endearing Volontè's character and providing a juxtoposition to the characters he made famous in some of Sergio Leone's classic Spaghetti Westerns. In a film dealing largely with role-reversal this is particularly apt.

I didn't quite know what to expect from 'A Bullet for the General', I hadn't previousley heard of the director and apparantly this was his first foray into the Western genre - but I was pleasantly suprised with the outcome. Providing a good mix of action and politics with commendable performances from Volontè, Kinski and Castel 'A Bullet for the General' is an intriguing and unique entry example of the Spaghetti Western and well worth your time whether you're a fan of the genre or not.